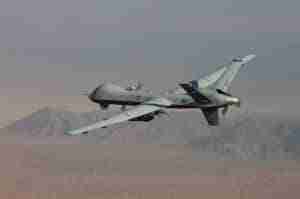 This Veteran’s Day, the attention of our nation will turn to those gallant men and women who have served or who are serving our country, often at great personal sacrifice and sometimes at great personal peril.  While this is attention is well-deserved, I’d like to praise a certain group of unsung heroes who are responsible for some of the most dramatic achievements in our war against terror and yet who get little to no recognition or praise.

Creech Air Force Base (Formerly Indian Springs Air Force Auxiliary Field) is located about 50 miles northwest of Las Vegas, Nevada – quite literally in the middle of nowhere.  It is the home of the 432nd Wing/Air Expeditionary Wing and is the location from which the USAF conducts the bulk of its remotely piloted vehicle (RPV) operations.   Here, on a daily basis, 24/7/365, often in 12-hour shifts, young aviators fight a war quite literally on the other side of the world from an air-conditioned secure-compartmentalized information facility or SCIF.   There are the pilots who fly the MQ-1B Predator and MQ-9 Reaper RPV’s and airmen who operate the sensors and while I could wax eloquently about the intelligence capability they provide for theater commander or the firepower they can rain upon our enemies, I’m not going to do that here.  Instead, I’m going to deal with the human cost they have to endure.

That’s right.  I said human cost.   Now some of you may ask: “How can there be a human cost here?  These men and women are safe and secure in the United States and even if the RPV they’re flying gets shot down, they still go home to their families at night!”

Well the cost is significant and it comes in two elements.

First, there is lack of “decompression time” for these men and women.  Let me explain.    Typically when the USAF has engaged in combat operations, it has deployed units to forward operating locations and the units have done their fighting from those locations.  Between missions, airmen have been able gather together and blow off steam and behave like the warriors they have to be to do the fighting and killing they’re tasked to do.  Once the fighting is over, the units return to their home bases and the airmen return to their families.  This process allows our fighting men and women to “decompress” from the stresses of combat and rejoin civilized society.  Let me emphasize here that there is nothing civilized about war and to succeed at it requires the willingness to bring incredible violence to bear on our enemies.  What I’m saying is that we WANT our male and female warriors to be uncivilized when they go to war.  So the transition from a “war mindset” to a “peace mindset” requires some adjustment or decompression time.  Ask any veteran who has been in combat to tell you about it.  Okay so here’s where the first element of the human cost for the men and women of the 432nd Wing comes into play.

They don’t get any decompression time.  Ever.

These young airmen kiss their significant others and children good bye when they leave to go to work and then for the duration of their shift at work they’re AT WAR.  They’re gathering intelligence so that someone else can kill the enemy or they’re actually doing the killing themselves.   Now if you’ve ever played a virtual reality video game, you know how easy it is to get wrapped up in that game and even get emotionally involved or obsessed with it.  Now imagine that it is real – it’s not a game and friendly personnel will actually die if you get something wrong and that if you get something right, you will actually take another human life or several lives.  What I’m saying is that the pressures are real and consequences are the highest imaginable.  And to be successful in the process, these airmen have to become the uncivilized warriors we need them to be.

Until their shift is over.

Then, we expect them to instantaneously shift back into their civilized mode and go home and become family men and women once again.  Oh and by the way, they can’t talk about anything they’ve done with their significant others because it’s all highly classified.  So imagine being a young father and you leave work after seeing several of your fellow servicemen die on the other side of the world because you weren’t as successful as you needed to be and now, thirty minutes later,  your toddler son is demanding attention or whining because he’s not getting his way.  Think about that for a moment.

And then there’s the second element of the cost – the killing is much more personal.

Let me explain that one.  While anyone who has been a ground soldier can tell you about killing people personally, most USAF people have no idea what that means.  We typically deliver our weapons at a distance or we overfly the target at high speed and the bombs detonate behind us or far below us and in most cases we never get to see, in real time, the human consequences of the destruction we are wreaking.  But not so for the RPV driver or sensor operator.  They not only see the destruction, they see it in high-definition color with a magnification level that makes them feel like they’re touching the targets they’re engaging.  It’s like they are there.  And then of course, there’s the instant replay for the intelligence debrief or to evaluate the weapons parameters or the sensor accuracy or a number of other things.  These young airmen and women see faces and they see body parts and gore that is unimaginable to anyone who hasn’t experienced it – and oh by the way, it’s real.  And it’s real personal.

And then their shift is over and they have to go out the door and go back to the real world.  Imagine being a young mother and right after you’ve decimated an enemy convoy and watched arms, legs and heads fly across the video screen in front of you, you have to pick up your 5-year-old from daycare and listen to some other mom talk about how bad her day has been.

What adds insult to injury here is that RPV operators don’t get much respect from their fellow aviators, especially those who are former fighter pilots.  Recently, I broached a discussion about the human cost these young men and women pay in a forum where military aviators often opine and was shocked at the lack of understanding or empathy I found there.  And if you’re thinking their aviation skills are lacking – you’d be wrong.  Two former members of the 432nd Wing recently took top honors in the toughest flying course the USAF has – its much vaunted test pilot school.

God bless you guys.  It’s people like you that make America great.